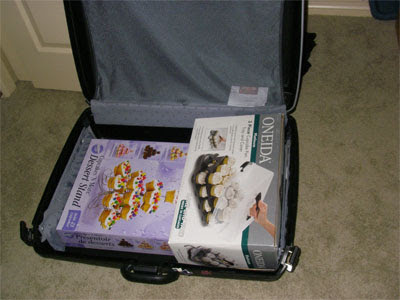 Before I left for Singapore, I packed these items that a blogger friend had purchased at Amazon.com, and I was happy to do it for her and her lovely princess. When we got there, I was too wary from the trip and the kids not sleeping on two legs of the trip that I missed meeting up with her the following morning, which incidentally was 4 hours after we arrived, but we made up for lost time quickly when we met up and we chatted, visited and exchanged gifts while her princess and my kids played. 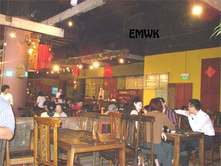 Then we went to Vivo City Republic Food Court where we took turns queueing in line at various booths/stalls for a fun lunch of Hokkien Mee, Chicken Rice, Siew Mei, Har Gow, Soya bean drink and yu cha kwa. All the kids ate well on the chicken rice and mine even tried new items like siew mai because they saw her kid eating them. I had loaded that series of pictures onto my laptop, but for some reason, it's just uploading to blogger in smaller pics, so please excuse these tiny pictures. 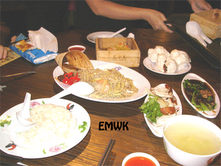 Then she brought me to Daiso where I was happily browsed through each aisle for interesting items with one kid in my stroller while her princess happily took care of my other one. It was so nice to have an older kid around my little ones, and my kids just loved her. We also hooked up with Beau Lotus who happened to be in town for her brother's wedding, and all the kids got to play for a little while while we had lunch at Swenson's and chatted at Toyrus since it was raining outside. Singairishgirl was certainly a sweet lady and even brought her lovely cheesecake bakes over during a horrendous downpour on the day we agreed to meet up again. I felt terrible that I missed her princess's birthday party that Sunday in January when one of my kids got sick after brunch. And in my over-protective, motherly self, I wouldn't take my kids anywhere when they are sick as I wouldn't risk spreading whatever my kids have to other unsuspecting kids. And at that moment I didn't know what was wrong with her (LCOM can certainly attest to that). But she quickly recovered after a 5-hour nap, and was back to herself the next day. I hope princess liked the gifts that my little ones picked out for her though? And I saw that she put that little bag of almonds Hubs brought her to good use for CNY. :)

Thanks, Singairishgirl for your kind hospitality and gracious personality!
Posted by East Meets West Kitchen at 11:11 PM

Thank you, girlfriend, for everything and also it was so lovely meeting you and the twins. It's amazing that the kids got on so well. How cute they are. Hope to see you back again sometime. Pity that they had to miss the party, but I have their goody bags' stuff on the way to you, so let me know when you get them.

By the way, thanks for the almonds. That was so thoughtful of you. :)

hey hey!! What a great trip! can't wait to meet up with singairishgirl when I'm back too!

I have to pay a visit at V's house so that I can look at all the uncensored pictures! LOL!

Oooo, sounds like you had a great trip!! all that food!

Hi Singairishgirl,
I'm missing already, especially the text messages! :)
You are so kind, and you're most welcome!!!

Hi Daphne,
She's a sweetie, and I wish I can be there when the two of you meet!

Hi Wokandspoon,
Yeah, it was a very nice trip once I got off the plane. :)