I had some time in between the kids' nap last week, and decided to try out this Chinese pretzels recipe I noticed in Alex Goh's baking book. 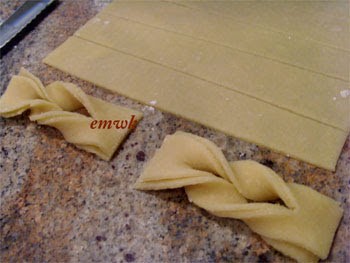 The dough was simple with few ingredients consisting of all purpose flour, sugar, egg and butter, and it need to rest for half an hour before rolling it out. This is the point when the kids woke up from their nap, and everything went downhill from there. I quickly rolled out the dough and twisted them. 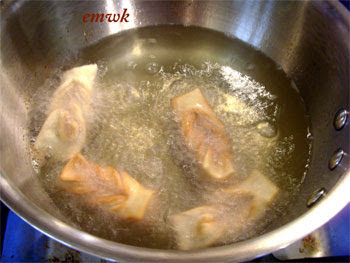 Then after I gave the kids their snacks of string cheese and fruit, I returned to deep fry these. 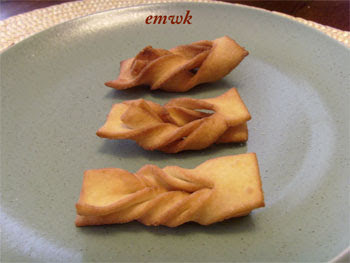 The end result. Since it was my first try, I figured out that the dough should be roller thinner the next time, and to never take on a project during the kids' naps. Hubs liked it, and the kids polished up most of it that day. In fact, I only have about 5 pieces left when I took this picture. The recipe only made about 30 pieces this time around. Will try making this again when I have more time in my hands.

And while I'm on the subject of Chinese, the new series of "NI-HAO, Kai Lan" on Nickelodeon premiered last week, and has been very entertaining for the kids. It's a little like Dora, except Kai Lan (pronounced Kai Lian, not like that vegetable) teaches kids words in Mandarin instead. It's perfect for preschoolers, and I can see my little ones picking up Mandarin words for up, down, red, green and that's only in 2 episodes. It also reinforces the little amount of Mandarin I try to teach them at home. Kudos to Nickelodeon for adding Kai Lan! 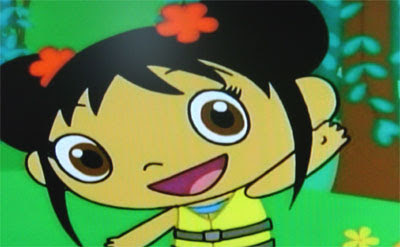 This picture was captured from my television last week, when Ni hao, Kai Lan show started on Chinese New Year. A very auspicious day, don't you think?
Posted by East Meets West Kitchen at 11:18 AM

the pattern on the pretzels look great! Good for munching on. and love those pink lollies too!

tats great!!! I will quiz the girls on chinese numbers eleven onwards next time i see them!!! ;P

Evy loves this Kai Lan show too and since I don't have cable, she has been watching it on her notebook, that's when I know there is this new mandarin show.

Kudos indeed! That is so cool!

Wow, I love how you rolled out the pastry so squarish and so nice. Hurray for Kai Lan, although we haven't caught it yet as we hardly watch Nick. You should try make more of an effort to teach them. It'd be great for them to learn your mother tongue.

Hi Ioyces,
LOL! Hope they will remember all the chinese numbers by then!

Hey C,
Don't you get it on dishtv?

Hey Singairishgirl,
Thanks! You can go to nickjr.com and princess can play and watch clips of Backyardigans and Kai Lan there.

Oh wow, thanks. Will do that.

V, we only pay for Chinese channels and local channels, so I haven't watched food network for two years!