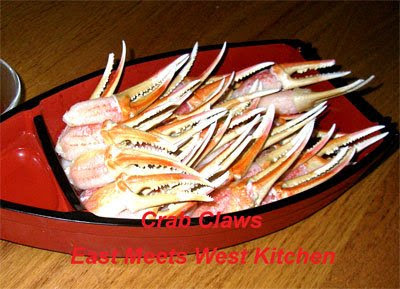 Found these the other day in the frozen section of the store, and only required steaming and a mean cocktail sauce! I just love the simplicity of summertime!

I am traveling (on the road again), and will not be posting for a while. But I'll be surfing around looking at all the lovely eats whenever I can!

Happy Summer to all!
Posted by East Meets West Kitchen at 12:56 PM 22 comments: 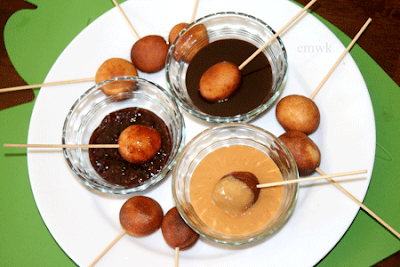 I'm EMWK and I'm a dunker/dipper. There, I admitted it! And there's nothing better than dipping/dunking donuts into a cuppa strong, black coffee. Or warm, crusty french bread into a hot bowl of curry chicken. So many things to dunk and so little time. Fondues are great for me as I get to dunk everything. But please, NO second dunking/dipping like so many with their veggie dip at parties. That's a NO-NO in this household. That is why everyone gets their own little bowl for dunking or dipping. So, are you a dunker?

Incidentally, don't tell Homer Simpson this, but did you know that National Doughnut (or Donut) Day is celebrated on the first Friday of June (which is today), and there's also a National Doughnut week in UK? According to the explanation on Lamar's Donuts site, National Donut Day is celebrated on the first Friday in June? In 1917, Salvation Army female volunteers known as “lassies” prepared thousands of fresh donuts to the homesick soldiers that served in France during World War I. National Donut Day was officially established in 1938 by the Chicago Salvation Army to raise much-needed funds during the Great Depression.

I should have gone out to get a free donut at the local Lamars or Krispy Kreme stores today. But it was raining again this morning and I didn't get over the to the nearest doughnut store, so I made a batch of doughnuts to pacify my kids' sweet cravings.

Used a simple recipe from Joy of Cooking and made a bunch of donut holes which was perfect for dipping into individual bowls of chocolate glaze, raspberry jam, and creamy peanut butter. Dunk, Dunk, Dunk! What a Dipping Delight it was! 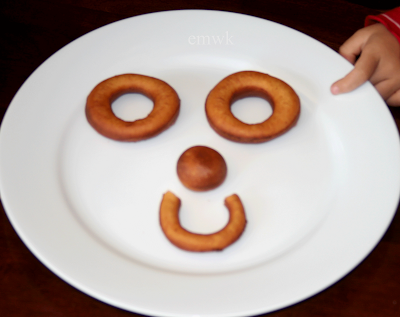 I also made some doughnuts without glaze so that the kids can dip it into their choice of flavors.

There is another doughnut recipe from Gourmet that I tried sometime ago here.

And here's some names that doughnuts/donuts go by around the world...