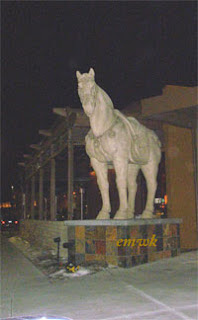 The fifteen days of Chinese New Year had flown by quickly. And today marks the last day of CNY celebration.
As with the first day of Chinese New Year , the last day of CNY also has it's own set of rules to follow. Also known as Chap Goh Mei in Fujian/Hokkien dialect, there are a string of rituals, and all of which are somewhat unfamiliar to me. It is also known as Lantern Festival in China, or otherwise known as the Shuang Yuan Festival. See this article on wikipedia for more information.

However, the most important tradition for me on this day is to sit the family down (not frequent enough) again for another chinese meal. Hubs and I were in traffic and he suggested going to PF Chang's Bistro for that. And who am I to argue with that. After all, it saves me alot of cleaning up, which I gladly not do. He, on the other hand, was very smart with that move, as it ensures that he will not come across any questionable, surprisingly non-american ingredients (like dried shrimp aka haebee) with his dinner since this is an american-style chinese restaurant. Ha!

For me, the highlight of the dinner was their chopsticks. I loved that it's tappered on both ends and it makes it such a hygenic way to serve others at the table with the opposite end of that which goes into one's mouth. And the dishes were geared towards Hub's tastebuds. 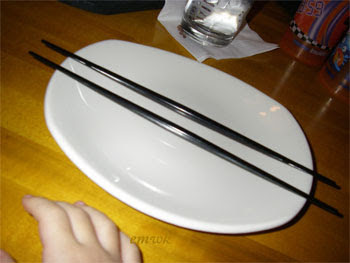 Isn't it so practical to have double-ended chopsticks so that one could serve other's at the table without passing on the germs. I think my friend Ioyces would love these! But when I asked our non-attentive waiter where I could find these chopsticks, he never got back to me when he said he would. Was I surprised? 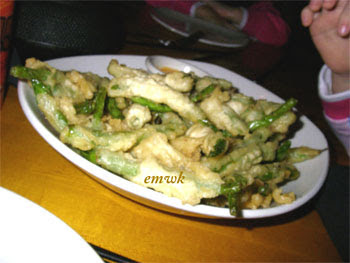 For starters, we had their fried green beans that had a panko batter to it. The beans were ok, but the sauce was great. I think they used sambal olek and mayo in the sauce. 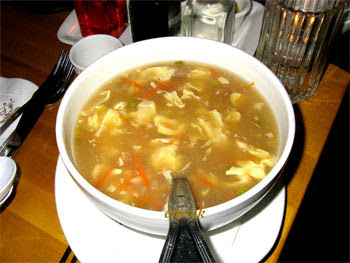 This is a bowl of egg drop soup that serves 6. The kids and Hubs loved it and it was almost gone when the other dishes arrived. 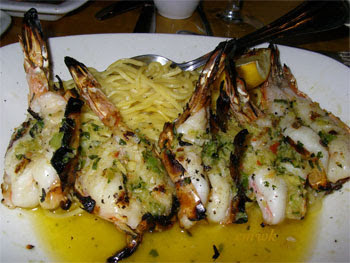 I loved this dish of garlic buttered grilled butterfly shrimp with noodles, and it was served piping, steaming hot on the plate which helped. 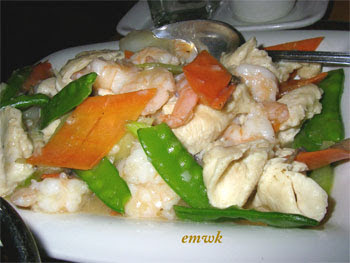 This dish is called Moo Shu Gai Pan, and was notably the kids' favorite. 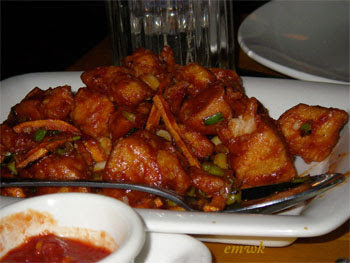 Hubs favorite and it's their Orange Peel Chicken with tons of garlic.

We came home for dessert and had tang yuen, the traditional sweet desserts soup for this day. I made mine in a slow cooker with red beans and longans, and one again the kids helped with rolling the tang yuens. 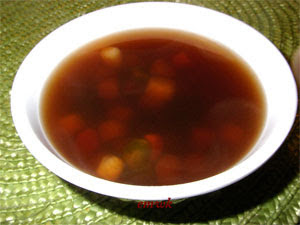 Yayyyy! You went out to celebrate the last day of CNY by eating Chinese food! Food look delicious and your hubs very smart! LOL!
I just told my hubby yesterday that I forgot to put longan in my red bean soup! Glad that you all had some tang yuens too! *High Five!*

Astute husband!!!! :) Sounds like the family had a good chap goh meh- bodes a prosperous year ahead?
hehe...yeah...those chopsticks are ingenious!!!

wow, yum, what a lovely dinner.

Hey C,
Yes, it was fun! High Five back at ya! The tang yuens were inspired by you!

Hi anon,
Thanks! I find their chicken lettuce wraps inconsistent. Sometimes ok, but sometimes very salty. Guess it depends on who's cooking.

Hi Ioyces,
Haha! Yes! Hope so! Yeah, I thought of you immediately!

Hi Singairishgirl,
Thanks! You wanna come over?

Hey Beau Lotus,
Leave it to you to figure that out. But I was thinking that too, but the side for others will probably have food stuck onto it as it won't be cleaned by my lips(that is if I remember, hehe!)