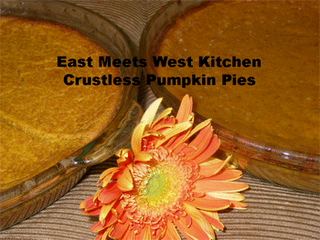 Been working on a pumpkin pie without pie crust. I love the pastry, but some members of the family don't care for pie shells, so I'm experimenting on these recipes. In the picture above, the one on the right is from Libby's, and the other one is adapted from Lori Delosh's recipe:
Libby's Pumpkin Pie 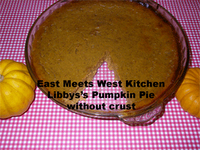 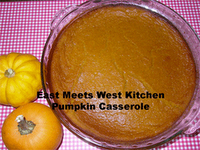 All ingredients same as above, plus 1/2 cup self-rising four, and 1/2 cup butter, melted.

According to Hubs, the Libby's one is like a pudding, silky, big pumpkin flavor, and very moist, whereas the casserole recipe was easier to slice into, less moist and a more subtle flavor of the two.
Posted by East Meets West Kitchen at 8:50 PM

Wish I lived next door to you!!! Think of all the cakes you'll be sending over to me. John would have loved it!

Hi anonymous,
Thank you for your kind words. If I live next to you, I'll defintely send some bakes over. Btw, I think I know who you are since you mentioned John! :)