Growing up with these coconut candy was a treat. They are hard and chewy little cubes of coconut joy, and usually colored pink and light green. They are also made with a few simple ingredients like coconut flakes, sugar, and milk.

Made some coconut candy from Mrs. Leong Yee Soo's cookbook the first time, and the first batch turned out a little moist when I used less than half the amount of sugar to compensate for the sweetened coconut flakes found at the local grocery store. My kids loved it as it was moist and chewy and went down great with a tall glass of nicely chilled milk. The second batch with the unsweetened grated coconut flakes from Wholefoods came out perfectly hard, like the ones found in Malaysia and Singapore, and H wolfed that down. I was going to make a batch of pink and another batch of green. However, the kids voted for pink, and H said he rather have it without any coloring added to it the next time. I used a little condensed milk as stated in her recipe, and it was a winner.

Thanks June, for reminding me of this yummy sweet candy from my childhood! 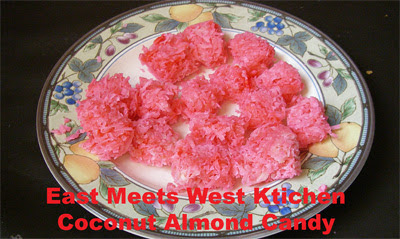 The second time I made this, I used Amy Beh's recipe and it came out great too.
2 1/2 freshly grated coconut (only the white part)

Add vanilla essence and egg white and keep on stirring until mixture turns quite dry and does not stick to the sides of the saucepan.

Turn out mixture onto greased cookie trays. Level the mixture by pressing down with a flat spatula. Set aside to cool.

When the coconut candy has hardened slightly, cut into small cubes with a lightly greased knife. Store in an airtight container.

Recipe from Amy Beh.
Posted by East Meets West Kitchen at 7:01 AM