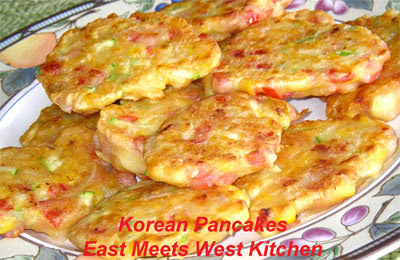 When my in-laws read this post, they will be probably be saying "Oh NO! She's feeding our grandkids pancakes for dinner!"

To which I would reply, "It's loaded with veggies, whole-wheat flour, and good for them!"

Since I have been barbequing alot lately, I made some korean pancakes tonight to go with asian marinated steak. I love the chewy texture of this savory pancake and made mini-sized ones this time. Also called boo chim gae, it is often served as an appetizer or snack in Korea. Today I'm making it as a side dish. And since I have this old newspaper clipping from Vancouver for making korean pancakes from scatch, I decided to give this a try.

Korean pancakes are very versatile, and you can't go wrong on what ingredients to add to it (well, almost!) I have made it before a with chives, ham and pineapple combo, a shrimp olives and tomatoes combo, and a veggies with shredded chicken combo. They were all good with spicy chili sauce. Tonight, I made a vegetarian version with zucchini, tomatoes, and corn. Also added chilies on some of them (for me!) 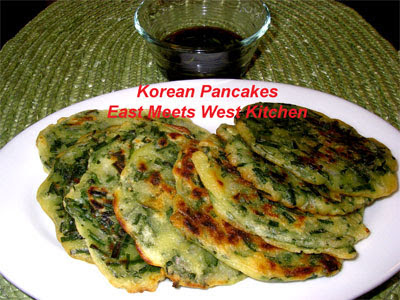 1 small raw potato, peeled chopped and ground into a paste in blender or food processor 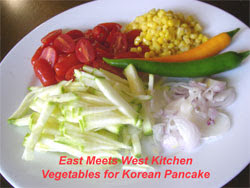 Add the first 8 ingredients to a bowl and mix gently. Then add the rest of the vegetables and black pepper. At this point, if the batter is too thick, add 1-2 Tbs more water.

Heat up a non-stick skillet with a little oil. I like to make mini pancakes for the kids, but you can make one that 4-6 inches wide and up to 1/4 inch thick. When it's browned and crispy, flip it over and cook for another 3-5 mins over med. heat.

You may slice it and serve it with a sauce of one part soy sauce, one part rice vinegar, 1/8 part sesame oil and thinly sliced green onions, hot pepper flakes and toasted sesame seeds.
Enjoy!

Mark Bittman, aka the minimalist has a video on making a similiar korean pancake called Pa Jun.

Note: Made two batches, one with chilies, one without.
This may be a little more work than opening a packet of premix korean pancake from the store, but the good part is that there's no MSG in the homemade version. It's also easy as I just mix all the ingredients together. The most time consuming part was slicing the vegetables. 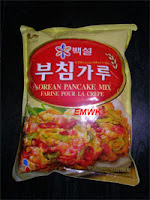 Update 8/8: For Steamy Kitchen, I went to the asian market and took a picture of the korean pancake premix for you since you haven't seen it at the store. I prefer the homemade ones as the premix contains MSG. But my friends who had tried this premix before liked it.
Posted by East Meets West Kitchen at 11:54 PM

This somehow reminded me of one of those childhood egg omelettes I used to eat at home - with fishcakes, sliced red chili and scallions.Hmmmm....

Now everything is korean except a korean drama :P

Hi Tigerfish,
Oooo! Fish cake sounds good with it too! LOL! So true!!!

I'm wondering is the korean pancake the same as Vietnamese pancake? I actually have the Viet. pancake mix at home. It does look similar but do you know?

This is great. I love the Korean pancake and will order this when we dine at the Korean Restaurant here.

That looks really yummy! Pancakes for dinner - very original! How did your kids like them?

thanks for the recipe. I like Korean pancake! I tried the Enoki Mushroom's version, but will definitely give yours a try soon!

Sounds healthy alright. Actually it reminds me of the Japanese omelette or pancakes....

Hi gf!
Thanks! I think that the vietnamese pancakes have tumeric in them, but otherwise, I think they are similiar. You may want to check the ingredients on your pancake mix though.

Hi Sue Sue,
Thanks! I love the korean pancakes in Penang when I lived there.

Hi Wokandspoon,
Thanks! They called it veggie cakes and they had 3 pieces each. LOL!

Hi Mandy,
You are most welcome! Let me know how your turn out. :)

Hi Judy,
Thanks! I think there's a similiar version in chinese, japanese, vietnamese etc. LOL! Maybe the korean restaurants made it popular?!?

Hi Steamy Kitchen,
From what I understand, there are many kinds of Korean pancakes. The ones I did, boo chim gae had lots of zucchini and used wheat flour, and were crispy on the outside and chewy on the inside with lots of vegetables. Why it's called korean pancakes may be that it's usually found on the menu in korean restaurants and became a popular item? It doesn't use eggs (which some asian pancakes do), and call for water instead of milk. I will get a packet of the premix when I go to the asian market, and will post the pic here this weekend.

Waw... Look like I found a great chef here! Thanks for sharing. Love ur food so much! Drooling already! haha....

Hi Healy,
Thanks for dropping by! LOL! You are very sweet to say that, and I am truly embarrassed! ;)

I like these pancakes. My korean friend made these for me when she was here and left me the korean pancake flour :)

Hi Cooking ninja,
I used to make korean pancakes with the premix too, but used this recipe this time around, and it was easy. :)