Back to my other hobby... 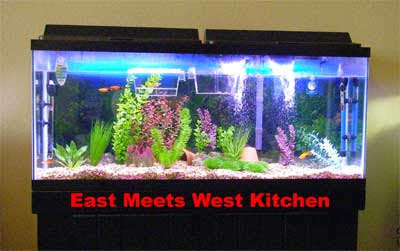 Miss me? Been MIA for a couple of weeks due to an emergence of another hobby that's not food related. Yes, I received a 55 gal aquarium and stand for Christmas, and had to decide on what to put in it. Finally found a spot for it, and then it was the question of what kind of fish. While it's been cycled, there were several ideas given by family and friends. Ideas run amok from saltwater to freshwater tanks. Then GG from SGP suggested an Oscar, and she said that when it's big enough I can cook it and display on my blog... I hope she was kidding! Uhhh, not my cup of tea, GG. Besides the bad idea of eating a pet, I also prefer going to Whole Foods for my fish selection. So, after some deliberation, I decided to have swordtails in my new aquarium. My children are enjoying the aquarium, and have named all nine fishes already! Thus my absence from blogging. I have been cooking, but now will let my blog catch up with my kitchen adventures... ;)
Posted by East Meets West Kitchen at 5:38 AM