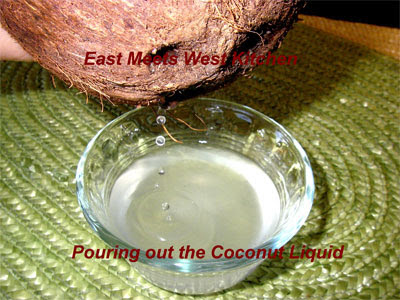 Funny how the songs of our childhood can be stuck in our heads for such a long time, and little things we do a minute ago can be lost... like where did I place the car keys?

I remembered my older cousins spelling C-O-C-O, N-U-T, and singing coconut, coconut, A-B-C! I shouldn't have said that out loud while attacking my coconut earlier, because now my kids are singing it too. Over and over and over and over .... not again!

Yes, you heard me right. I was attacking the coconut and trying to crack it's hard stubborn shell. All for a little fresh coconut treat inside this little round tropical fruit. In my previous life, I had grown up in an area coconut trees would sprout along the beaches (if space would allow) and coconut vendors at the wet market where my mom could purchase coconut in any form for cooking, but I never thought I would be here today writing about my own little experience. And that's what we have to do when we don't have the conveniences of our desired location.

In case you're wondering why I was singing coconuts, it's because of a sinister looking gadget/contraption called a coconut shredder. It is made in India and none of my friends in South-east Asia knew what this was or why I would want this thing. 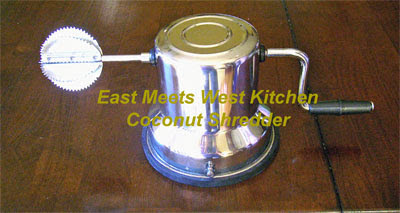 I had been searching the globe for this apparatus from my little red chair in front of my laptop, and emailed every friend I had (or used to have) asking if she/he/they have seen a coconut shredder of that sort. Finally, my dear SS (she prefers I call her that in my blog) send this to me two months ago. Well I received it yesterday (HOORAY!) and ran out to buy two coconuts for my experiment.

Now comes the tricky part. I am aware that cracking open coconuts are no small feat, and I am venturing into unknown territories. Done my little research in the form of reading everything about how to crack open a coconut. And I have read a few scary and funny stories on this subject. But actually doing it is.....well, INTERESTINGLY something I would do again. But not sometime soon.

First, I used a short screwdriver and poke into one of the eyes of the coconut. Sounds cruel and so Halloween-like, don't you think?

The first eye was easy to piece through. The second one was tricky and I had to use a hammer and an ice pick. Maybe the coconut didn't like two of it's three eyes pieced. I was done after that making those two holes. Drained the liquid out of the coconut as you saw in the first picture. One of the sites I visited suggested tapping the coconut with the back of a Chinese cleaver to crack open the coconut. Nothing. Tapped again. Nope. Nothing happened to my coconut when I did that. So I stopped doing that.

Then I took my coconut, an old chopping board, my hammer, and headed into the garage. There I used my hammer and knock on the coconut several times, singing that silly coconut song. My kids had followed me out and soon I heard their childish voices echoing to my song again from five feet behind me. Good thing the garage doors were shut, as I didn't want my neighbors walking by and looking into the garage as I hammered my coconut while wearing goggles and rubber gloves. And better for me that Hubs was not around the corner laughing! That coconut shell is a hard thing to crack. After the ninth hit, it cracked! YIPPEEE!. 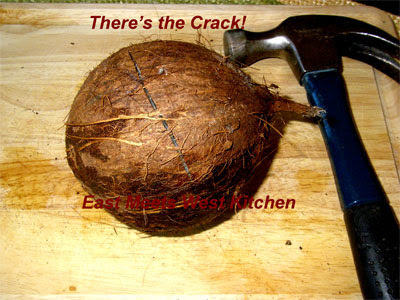 Back into the house with everything and kids in toll chanting that song in their little voices, I clean up all the tools, and proceeded to use my new found sinister coconut shredder. 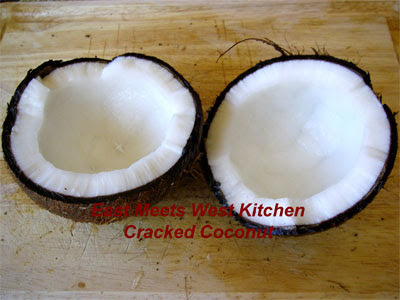 So what were your thoughts on that little mystery dish that required me to sought out the evil apparatus that seemed so appropriate for Halloween and for me to go through all this trouble with my coconuts?

A little guess, perhaps?
Posted by East Meets West Kitchen at 6:38 AM

That is a scary looking contraption.

That coconut gadget looks like a time machine! lol!

Hey, that gadget reminded me of the one we used to have in India. How similar they are, so did u get it from Malaysia? It grates coconut so easily without any fuss...loved it totally!

Hi! I came by way of Beau Lotus' blog.

I know that coconut ditty too! Gosh, it brings back memories.

I'm going to hazard a guess. Are you making ondeh ondeh or some kueh kueh that requires shredded coconut filling or as a coating?

Squeeze out a bit of the santan first and make bubur chacha. :P

I don't know about the dish, but my friend recently discovered young coconut and didn't know how to open it so she brought it to me. I cracked it open with a butcher knife. :)

I've seen the shredder before and think it's so cool. The only time my mom bought fresh coconut was to make candied coconut strips for the lunar new year.

You bought that gadget too huh? LOL! Sorry got to laugh! ;)

I usually just take theback of a cleaver & whack really hard!!! :) That is a cool looking thing. It's been a long time but I used to use a fish scaler to scrape it out. :P I', guessing ondeh-ondeh!

Hi Kelly,
Yes! It's so right for Halloween, don't you think?

Daphne Dear,
You can do it!
Yes, kuehs are in my future. hehe!

Hi Padma,
Yes! It's from India and I love it. Hubs thinks it's a scary though. ;)

Hi Dutchess,
Thanks for coming by!
YAY! Someone else know this ditty too! Can you tell me the rest of it? I can't seem to remember if it was from skipping rope?
You're right on!

Hi Judy,
Oooo! Maybe Coconut candy next. Although I've made them before. But bubur-chacha sounds great too!

Hi Wandering Chopsticks,
You are one brave, strong lady with a butcher knife!
And that coconut strip candy sounds great too!

Hey C,
Don't laugh so loud, I can hear you all the way to here!
Now if only I can throw the odeh odeh back over to you! haha!

Hi Blurmommy,
You are another strong lady to content with, using the back of your cleaver! Yes, ondeh ondeh coming up! :)

This is indeed a ditty for a skipping rope game for three. Two girls would rotate the rope while a third would be in the middle. They would sing:

so and and so forth until the one in the middle trips up. The goal is to reach to Z.

At least that was the way I remembered it played in the convent I studied in.

I am going to bury my head in embarrassment now...

Hey EMWK: The pic of your coconut grater took me back to my mom's kitchen. That is a very popular gadget in a lot of Indian kitchens, my mom's included. Sadly, I have no such thing here.
Those coconut balls look so cute!

You will not believe me but I have a similar coconut post coming out next week - October 20th! We are blogging twins!

Hi Dutchess,
Bravo for remembering the whole ditty! And I was a convent school kid too! :) You should be proud that you remembered it.

Hi TBC,
My girlfriend finally found it in India, and I was so happy to get it at last. It's now one of my favorite kitchen toy for coconuts. :)

Hi Cynthia,
Yay! I've been looking for a twin, and so glad it's you! haha!

We have some gadgets here too, if you want I can send you one! And I heard you wrap a cotton line around it, take it to your burner (if gas) or flame, the line will burn and it will split the coconut, I haven't tried though...

Hi Cris,
You are so sweet!
The string idea is new to me, so I'll definitely have to try that next. :)