While I was under medication for my cold, I decided to start on a box of DVDs that my dear friend Hazel had graciously left me on her departure back to Singapore back in February. I was pleasantly surprised at this new age, romantic, riches to rags princess fairytale love story with lots of fried oyster omelets in between. A total chick flick with added bonus of watching the makings of a Taiwanese-style oyster omelet that is vaguely familiar with the Singapore/Malaysian version. Cooking and drama. What more could an oyster-loving-girl ask? And of course I couldn't wait til I recovered and could taste food again to try out several oyster omelets myself.

For more information on 'Oar Jien' or oyster omelets that are commonly sold in Taiwan, Singapore, Malaysia and Hong Kong, click here. 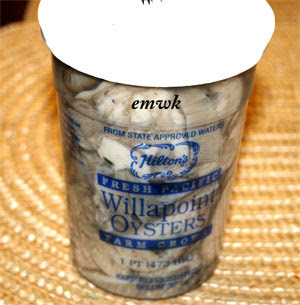 Here's the fresh tub of fresh oysters from Washington. I called it a tub because that's what it felt to me as I was the only one consuming oysters in my family. Yes, the kids and Hubs are not fans of oysters... so more for me! 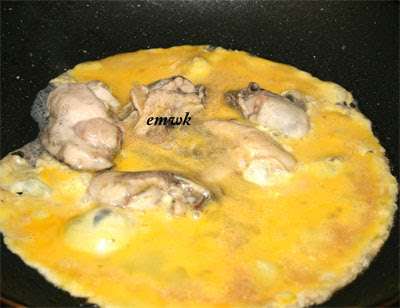 My first attempt used no oil in a non-stick skillet... 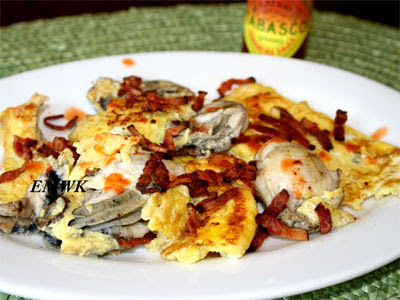 This turned out very well with my addition of browned crunchy bacon bits. Not like the ones sold in Singapore, Penang or Taiwan, I'm sure, but the added smokiness and crispiness of the bacon did add to the whole dish. And a few additional dashes of Tabasco made it heavenly. 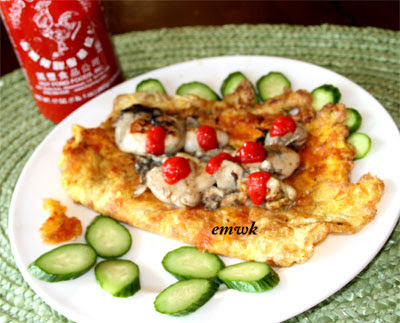 Second attempt, tried this without the bacon and with the Asian chili sauce. Much spicier! Also added a little oil while cooking this and it did increase the crispiness of the omelet.

My blogger friend Lee Ping has a nice recipe on her site if you are interested in trying out the authentic version.
Posted by East Meets West Kitchen at 12:09 AM

That some big oysters!

I had oysters for lunch today. With bbq and hot pot though. :P

wah...i get cravings every time i come to ur blog V!!!
Oar Jien...mmmmmmMmm!!

Thanks for the link, sister!

Oh my god, there's so much effective information above!