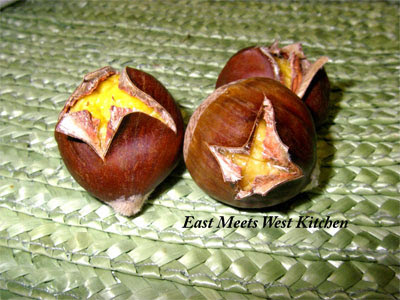 When I was a about 6, I remember my family driving up to Cameron Highlands, Malaysia, and on the way, we would stop at all the wonderful places for good eats. As a kid, I was only into fried foods and steamed fish back then, but I do remember the snacks. And there were some yummy snacks along the way that made quite an impression on my mind.

One of the many wonderful treats was chestnuts. I remembered the little stall with a gigantic wok that was burned black from use, and they were half filled with black aromatic little black beans that dad later told me were coffee beans, and the chestnuts were tossed around these coffee beans over a hot fire til they were cooked. The vendor or chestnut man as I called him, would vigorously stir the contents on the wok, and there would be a younger person with him taking orders and scooping out the cooked chestnuts into a paper bag. Then I would watch my dad gingerly grab a hot chestnut as he tried to peel off the shell and skin for me. Thank heaven for parents catering to us.

So when I saw the pile of chestnut at the asian market yesterday, I couldn't help but scoop up a couple of handfuls to try. And I after I came home, I was wondering how to prepare it. 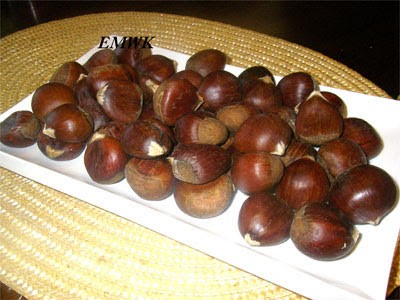 Should I roast it on an open fire? No, too risky, and I might just burn the house down. Besides I don't really have an open fire, just gas fireplaces.

Should I do the coffee beans trick? Seem like such a waste for great Hawaiian coffee beans.

Should I microwave it? That's a thought! So I cut a cross on top of 3 (my lucky number) chestnuts, placed it on a paper plate, put them in the microwave for 1 minute and dashed to the other side of the room with the kids just in case it explodes!

Well, there was no explosion (thankfully), and the chestnuts looked adorable with their shells curved outward where the slits were cut (above pic). Two were cooked and the other slightly undercooked. May have to tweak the power on my microwave and try this again. Or maybe I'll try the candied, boiled or coffee bean roasted versions after I get hold of some inexpensive coffee beans next.

Have you ever microwaved a chestnut?
What's your favorite way to enjoy chestnuts?
Posted by East Meets West Kitchen at 7:09 AM

heehee, my chestnuts r the dried,peeled ones. I braise them in chicken/pork stew.

Sorry, me no help here, never try it before and also don't know how to eat it! Believe it or not, I never try those roasted chestnut in M'sia too!! O.O

I love chestnuts in stews, but usually buy the ones that are dried.

I love all nuts and Chestnuts is one of my favourites. I always microwave those chestnuts - the fastest way of 'roasting' (cooking) them. As long as the chestnuts are slit, they won't explode. Another way of cooking the nuts which is also what I did is boiling them. Have fun.

I use instant or cooked chestnuts lol!

Hi Peony,
I should get the dried, peeled ones next time. And I love them in chicken/pork stew too!

Hey C,
LOL! I should bring some for you to try!

Hi San.y,
Another one for dried chestnuts!

Hi Anonymous,
Haha! I wanted to get the kids out of the kitchen, and saying that they would explode was a good trick! So, when you boil them, do you remove the shells first?

Hi Big Boys Oven,
Instant or cooked chestnuts would be a good way to go next time!

Oh we just put them in the toaster oven for 20 mins.
It works well (although i'm not sure what temperature my mom sets it to).

I love chestnut too. My mom used to parboil it and then roast it in the oven or used it in chicken stew too.

Hi Anonymous,
Thanks! Will definitely try that! :)

Hi Precious Moments,
Thanks for leaving a comment!
I should try your method too. And I so love them in chicken stew. YUM!

Hi Janice,
I am so missing chestnut drink now!:0

You know how and where I love my chestnuts? In those canned port trotters!!! And they usually use it to fry bee hoon! But there's usually just 2-3 chestnuts in a can.

Hi Tigerfish,
LOL! You just reminded me of those canned pork trotters with chestnuts. My grandma loved them!

hahaha.... I'm scared to use the microwave. I bought a microwave once and for 3 years it was used less than 10 times. I sold it to a second hand stall for S$5!

I would buy ready roasted chestnuts. For uncooked ones, I prefer to stew it with pork.

Love chestnuts, we call it Portuguese chestnuts, around Christmas they are so popular here! Love the title of your post!

I also have no idea!! :P I buy the cooked ones.

Hi Eastcoastlife,
Haha! It's very convenient to have a microwave. Maybe you should try the new ones now. ;)
Just be careful what you put in it.
Yes, I love it in stews too!

Hi Cris,
Haha! They are so tasty, arn't they! Yes, I knew you would appreciate the title. :)

Hi Blurmommy,
LOL! Should try the fresh ones one day. ;)

I usually boiled the chestnuts with salt water...i was told it's less heaty as compared to the roasted version.

HI There
In replying to your question of boiling chestnuts, yes, whole boil with shell. This way the sweet taste goodness is conseal. Try both and advise which you like. Thanks

Thanks Anomymous,
I'll try the boiling method this weekend! :)