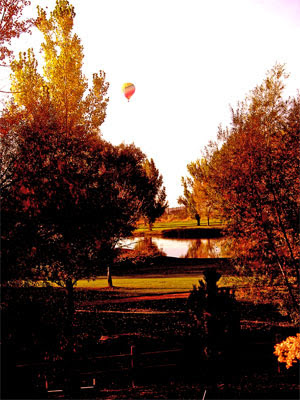 Not much cooking or baking this weekend as one of my kids woke up on Saturday morning with croup (sounded like a seal barking) and her sibling also showed similar signs of stridor (squealing sound and difficulty breathing) the following day. Their pediatrician confirmed that this is the season and most kids will have it for 3-5 days.

But on a lighter note, I want to share with you this picture captured early Sunday at daybreak. The air balloon seemed to floating effortlessly by. The dawn air smelled of pine trees and the northern breeze was chilly, but it felt good to be outside listening to the birds chirping and the winding dancing in and around the trees. I felt recharged in my 10 minutes of solitude before running back into the house for warmth in the form of a cuppa hot chocolate. Later, the sun came out and warmed everything up by late morning. Winter is around the corner, but this was a great autumn day. And I'm hopeful that my kids' immune system will be stronger after this episode.
Posted by East Meets West Kitchen at 1:18 AM

Like I said to Blur Mommy, I do love the colours of autumn but not the weather that comes with it.

I hope your girls get well soon. :)

Oh I am so sorry to hear about your kids... my heart and prayers are with you... Oh, is this close to Diagonal? They used to have so many close to it, when I drove my husband to work, I used to tell him that it seemed they were taking a balloon ride before going to work every morning, never took a picture, wonder why. Beautiful shot!

Hi Judy,
Yeah, I'm begining to see how topsy-turvy change of weather this time of year can be hard on little ones too. :0 Thanks for your concern. They will be fine in a few days (fingers crossed).

Hi Cris,
Thanks for your kind words. They are leaning on me, all tugged in, and watching dvd right now. Yes, it is. There are tons in the summer time, but rarely do I see one this time of the year. :)

I hope your two little ones are feeling better soon. Guess they will be staying at home this week huh?

Oh, what a beautiful scenery with the hot air balloon! I sooo love your back view.

Hope your girls recover soon. Must be very cold for the person up in the air balloon. The trees over her are still 'evergreen.' The day after the typhoon on Saturday felt like summer again.

Hey C,
Thanks, I hope so too. Yes, they'll be staying home from school.
Yeah, I managed to catch it at the right time.:)

Hi Alice,
Thanks, I hope they'll be too. Yes, it must have been cold up there. You stay safe during this typhoon season, ok?

Beautiful picture!. Hopefully, everything is going all right with your kids.

Oh the poor kids... hope they are feeling better already. Poor mum too.

Oh no. Hope the kids are much better now. Hugs for both of them and Mommy.

I love the colours of Autumn. Singapore is clean and green all year round. Nothing much to complain actually. hehehe....

Hi Singairishgirl,
Thanks, they are feeling better today, although that cough still sounds nasty...

Hi ECL,
Thanks, and hugs back to you!
Yeah, I miss Singapore, especially when winter comes and it gets really ccccccccold! :)

Hope your girls are feeling better now. My gal has been coughing for the entire week too. Is that the view from your backyard? That's so beautiful! I love autumn too! :)

Nice photo.
Love the color of autumn and the nice breeze.

Hi Blurmommy,
Yeah, this cough has been lingering for awhile now...
Yes, it's a great time of year with the colors and some warm days in between!

Hi Tigerfish,
Thanks, and I'm hoping too...

Hi Florence,
Wah! The big si-fu stopped over! Thanks for leaving a comment! I love this season too. :)