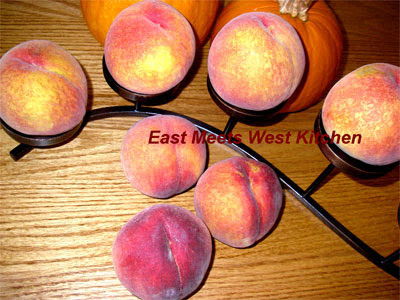 You've been so sweet and patient with this, and I'm typing this as fast as possible to let you know what I've done with that case of peaches. A couple went to the neighbors for house-sitting, a few were consumed in it's fresh, succulent, sweet, juicy state, and the rest were used in Peach Butter, Peach Tart and a Roasted Peach recipe. Will be posting the other two soon, but here's my Peach Butter. 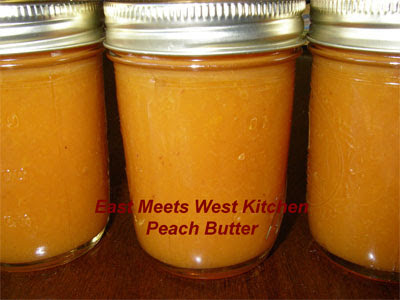 Much like apple butter, peach butter is a preserve made by slowly cooking peaches, sugar and spices (I used cinnamon) together. This is so good as a spread for breads. It's just natural sweet goodness!

For those of you that may be unfamiliar with peach butter, I made this as a variation from apple butter which according to wikipedia, is a highly concentrated form of apple sauce, produced by long, slow cooking of apples with cider or water to a point where the sugar in the apples caramelizes, turning the apple butter a deep brown. The concentration of sugar gives apple butter a much longer shelf life as a preserve than applesauce. Apple butter was a popular way of using apples in colonial America, and well into the 19th century. Hence, this is my version of peach butter using a little apple cider, a cinnamon stick and lots and lots of stirring. Made with TLC, of course!

The peach is a member of the rose family.

Peaches are extremely popular in the U.S. Only apples, oranges and bananas are consumed more than peaches.

The United States is the largest peach producer in the world. Peaches are grown commercially in almost every region of the country.

Fuzz helps the peach defend itself from various threats. Some feel the fuzz was developed to give the fruit more resistance to insects and diseases. Another theory is that the fuzz protects peaches from sunburn and potential water loss.

Not all the fruit on a tree ripens at the same time. Usually, fruit on the outside and top of the tree will ripen about a week before fruit on the middle and inside of the tree. When peaches ripen, the side that is facing the sun develops a rosy "blush," while the part not exposed turns from green to a creamy yellow. This color is the best indicator of ripeness.
Posted by East Meets West Kitchen at 8:00 PM

I love peach butter! Are you going to send some this way?

Hmmm...what is the difference between peach jam and peach butter? This is the first time I heard of peach butter, interesting!

oh nice! peach butter. I never tried this before!

Hi S.S.,
Haha! I should warn you that I will charge shipping to Singapore! :)

Hey C,
Peach butter takes longer to make, and is like applesauce consistency. Also peach butter has more fruit in it compared to jam or jelly.

Hi Daphne,
If only you live closer...As we cantonese say... "ho-siek" or good eats!

Hmmmm, this looks so good! I will let my mother-in-law know about this recipe, so easy huh, and they used to have many peaches in the area they lived, they moved to another farm, she had made some orange marmelade (or jelly?) the other time we visited.